Are you a photo enthusiast or a budding photographer with a passion for etching your name alongside some of the most critically acclaimed photographers of our time?

If the answer is yes, then you're probably already acquainted with an SD card and how big of a lifesaver it can be in terms of storage. Even if you're not into photography, you can never go wrong with owning the best compact flash card in this digital age.

Be it on the occasion of a trip or when you're a student or corporate worker, having a high-end memory card will go a long way to store the raw files in your DSLR or the large files you need for assignments or presentations.

Here are our in-depth reviews of six of the best SD cards available in the market. Go through each card's features, advantages, and disadvantages to understand which of these CompactFlash cards will suit your needs the best! 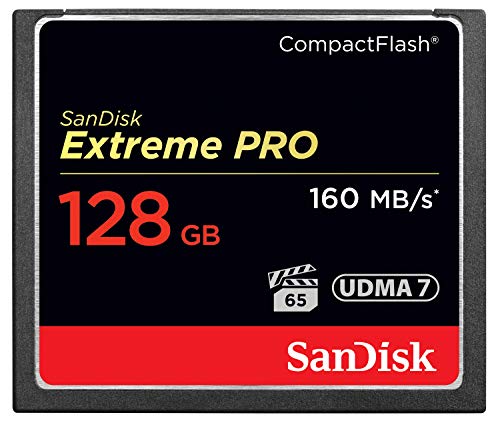 You will rarely find a memory card in the present market that can beat the SanDisk Extreme PRO in terms of performance.

Be it an attachment for video cameras to shoot an HD video or for a DSLR camera to hold raw format images, this behemoth of a CF card has the perfect blend of speed and storage space to cater to your needs ease.

Right off the bat, the first thing to attract you to the Extreme PRO will be its fantastic speed. Having a jaw-dropping maximum speed of 160MB/s and a minimum write speed of 65MB/s, this CF card determines the very definition of "high speed" and is light years ahead compared to other memory cards in this regard.

SanDisk has gone out of its way to ensure that this CompactFlash card has many storage options.

Ranging from a 16GB card to something as massive as a 128 GB memory card, the Extreme PRO can be the perfect companion for a photographer looking to click a ton of photos in their camera or shoot a full HD video without having to sacrifice the quality or reduce frame rates.

A noteworthy feature of this product happens to be the ingenious use of UDMA 7, which makes it stand out from most CF cards. By integrating this perk to the CF card, SanDisk ensures that both the reading and writing speeds of the Extreme PRO will be substantially higher than those with a rate of 150MB/s.

In terms of flaws, there are little to no problems that can be worth remembering with this flashcard. The only failure of SanDisk with the Extreme PRO is that it might crash from time to time when making a video despite having a high capacity. 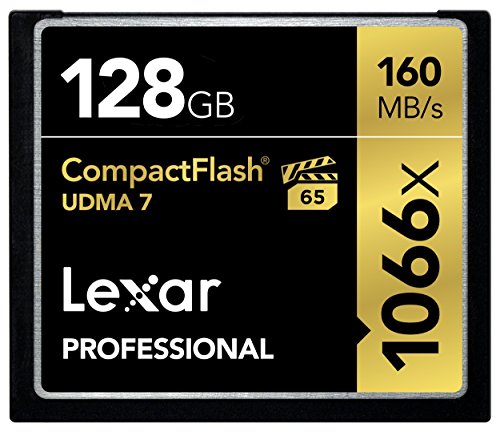 Making a video can be a daunting task, especially since you'll require a CompactFlash card with ample storage space and incredible speeds. Thankfully, the Lexar Professional 1066x can easily store and upload a full HD video or a 4K video; credit goes to its 128 GB space and stellar speed.

One of the most challenging tasks for a photographer happens to be transferring photos from their camera to their computer due to slow CompactFlash cards. However, this CF card by Lexar has high-speed file transfer for quickly moving around the high-quality photo and video smoothly.

The inclusion of UDMA 7 was a nice touch to increasing the overall speed of this CompactFlash card by Lexar. Propelling the read transfer speed to a whopping 1066x will have it reading and writing large files, video, and raw images in a matter of minutes.

One of the most significant risks videographers have to take when using CompactFlash cards or memory cards is the possibility of video dropping due to the product's low read-write speed. Lexar introduced the VPG-65 support, ensuring the video retains its high quality and has a greater rate than most other CF cards.

However, one of the most significant flaws that Lexar missed when making this product is how easily corruptible this memory card is, which can ruin your hard-clicked photos in a wink. 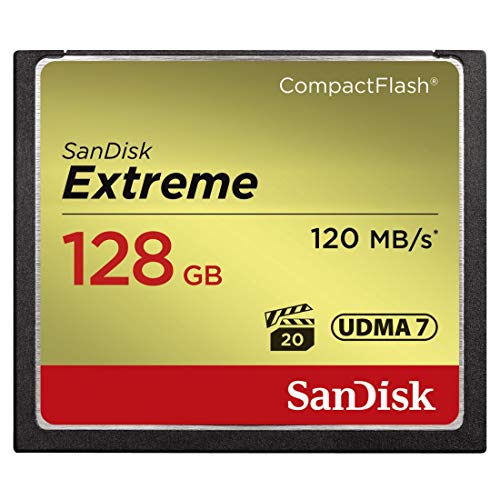 Very few CompactFlash memory cards can measure up to the reading and writing speed of the SanDisk Extreme. With a top read speed of 120MB/s and a top write speed of 85MB/s, this CompactFlash card provides high-end performance at a mid-range price point.

Space is not an issue when using this memory card, as you won't even be able to fill a fraction of it after switching your camera to burst mode. With a total space of 128GB, it is an excellent pick for photographers and is perfect for recording video clips.

Recording video is a smooth experience if you use this SD card. Unlike most flashcards, this unit has a sustainable recording speed of 20MB/s thanks to VPG 20, which ensures clarity in video streaming.

This CompactFlash card certainly has a considerable speed due to UDMA 7, which is greater than the average microSD card speeds. On top of that, this compact flash card also comes with a lifetime warranty, which is an additional bonus.

One of the key flaws the Compact Flash Association failed to see with this product is that it tends to lose files a lot. This compact flash card is also incompatible with a card reader, and you'll have to connect it to a camera to upload the files on a PC, which is highly inconvenient. 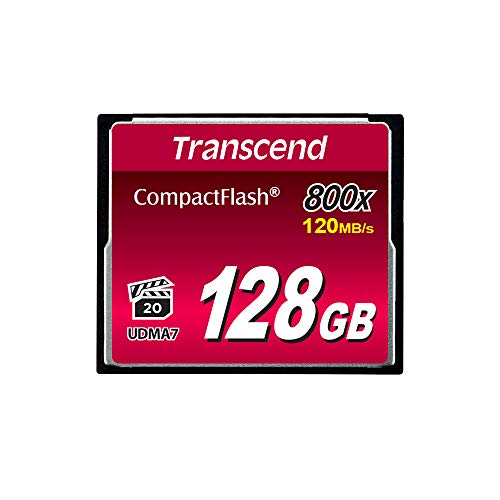 There are very few CF cards out there with speeds that can rival the Transcend 128GB CompactFlash. With a total read and write speed of 120MB/s and 60MB/s, respectively, it is the perfect companion for a camera.

You can transfer your photo or video collection from one device to another with this memory card. Unlike other CF cards, this unit is supportable with a high-speed DMA transfer mode, which highly boosts its full speed, making it move images at substantially higher speeds.

Unlike most cards with a poor speed, this unit is perfectly compatible with a camera due to having such a high performance. The cards' total speeds tend to be subpar, but this CompactFlash card has a great camera response for taking quick pictures in burst mode.

CompactFlash cards run the risk of losing their contents even though they can store them at a variety of high speeds. However, this card comes with its very own RecoveRx data recovery software, which will make sure that the CompactFlash card ensures safety alongside a remarkable speed.

Even though this unit is better than your average SDXC card with moderate speeds, it does have a glaring flaw. This CompactFlash card tends to stop reading the files despite having an impressive read speed, which will have you looking for a new compact flash memory card sooner than usual. 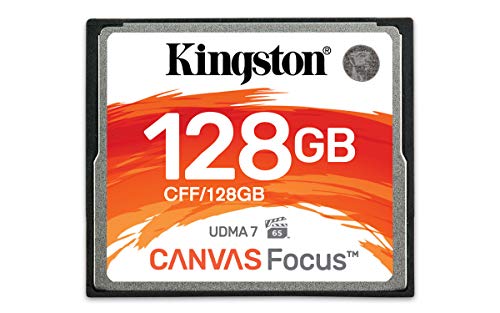 Recording a 4k video can be very difficult since it occupies a large space, and there is a high chance of the quality getting ruined. However, this card is one of the best SD cards for making a 4k video as it is VPG 65 supportable.

Photographers working on an affiliate commission get pretty jittery when buying a mid-range CompactFlash card. Most of them don't have great read and write speeds to chase deadlines dependably. However, these cards have a great transfer speed and can correctly move files around.

Very few CompactFlash cards tend to have good durability. However, this unit tends to be very sturdy and can withstand the harshest weather conditions while also sustaining most damage and dents from any accidents.

A content creator will have a fantastic time using this card as it is great for transferring data quite swiftly. The presence of Ultra Direct Access Mode bumps its speeds up to a level that easily surpasses that of its competitors with a sheer speed of 150MB s.

The most significant flaw of this unit lies in its file structure. This product runs the risk of not registering any files, which can ruin an entire day of work for you, especially if you're working on a project as big as a full HD photoshoot on your camera since it has a corrupted file structure. 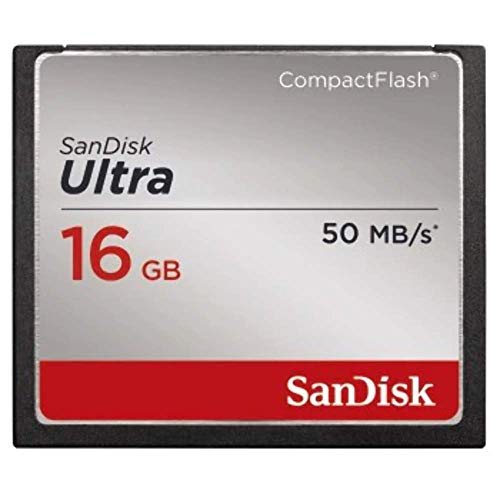 If you're someone who does photography as a hobby, then the SanDisk Ultra 16GB card is the perfect partner for your photography equipment. Available at an affordable rate, these cards have just enough space and speed to make your pastime enjoyable.

Unlike most CompactFlash cards, this product doesn't have a vast space. With a total space of a mere 16GB, it has enough space to store pictures for personal use like nature photography and provides a level of safety equal to that of the more premium versions like the SanDisk Extreme PRO.

Besides its value, this unit is up there with some of the best read speeds in the current market. With its read speeds reaching a maximum of 50MB/s, it can perform well enough to register and transfer its contents within a comfortably adequate time.

Moreover, this card's write speeds are highly commendable when it pairs up with its perfect read speeds, making it an ideal fit for recording a short video. This combination in a CompactFlash card massively reduces the lag time amidst shots and provides a stellar video performance guarantee.

Although this card has high reliability, it still comes with a couple of drawbacks that users will have to be aware of. In some cases, this CompactFlash card refuses to format with various DSLRs, which can ruin an entire day's hard work.

How long can an SD card store files?

The average CompactFlash card can hold data for as long as ten years. However, content in a memory card should be transferred as soon as possible as it is not meant to keep data for a long time.

Which devices are compatible with a flashcard?

Can all types of memory cards fit a camera?

The latest models of SD cards tend to be backward compatible and therefore work efficiently on most cameras. However, the limitations of the device itself are noteworthy when purchasing a CF card.

One of the most redeemable qualities of a CF card happens to be how easily you can format and start using it again. Having this feature ensures longevity and value in usage.

Do CF cards have an expiration date?

The longevity of a CompactFlash card depends on its manufacturing process. Although most of these products claim to last ten years, it's wise to go through the user manual to determine its actual lifespan.

Now that you have gone through all of our reviews, finding the best compact flashcards will be an absolute cakewalk for you. Just be aware of the device you will connect it to and its compatibility and limitations, and you'll have the perfect product in hand easily!